Christen and Alan’s Micro-Wedding in South Lake Tahoe was one that I will remember forever. I hope that you will love it just as much as I do!

This August wedding took place at the same time as the Caldor Fire. Though it was unbelievably smokey, it made for such a cool vibe for their photos. It look like we were in a foggy coastal ocean. Everything has pros and cons, right?

Our plan was to do a day-after session. However, the smoke was too bad. We decided to postpone, and I’ll be photographing them in July 2022.

Get to Know the Couple: Christen & Alan

Christen and Alan are both really big Star Wars fans. In fact, they met in February 2020 at a Star Wars-themed Beerfest. From there, they fell in love, and the rest is history! I guess you could say that the force was with them!

If you remember the timeline of the COVID-19 pandemic, the world began to shut down pretty soon after they met. They decided to quarantine together which only strengthened their love for one another.

The couple lives in Denver, but they traveled in for their Micro-Wedding in South Lake Tahoe. Alan actually grew up coming to the lake as a kid. Together, they decided that it would be a special place to get married.

Let me just say their wedding was so rad.

They decided on a midweek date, which I loved so much! Most couples opt for weekend dates so it is fun when a pair breaks tradition a bit!

PROTIP: When you have a week-day wedding, costs will be lower. Also, there is a lot higher chance that your vendors will be available for your date!

Because Christen and Alan’s special day was a micro-wedding, they had a lot of the regular wedding day things squished into a more intimate timeframe!

They had everyone stay at the Base Camp Hotel which also served as their “get-ready” spot! I started off by photographing some photos with Alan and his guys. Then I headed over to the girlies and captured detail photos, as well as, photos of Christen getting all dolled up!

Christen decided to do a first look with her dad before her first look with Alan and which was such a so sweet moment. Parent first looks always turn out so well, and they are a great alternative if you don’t want to do it with your partner.

At their first look, C & A decided to privately read their vows to one another. They wanted that moment to be special to them. In their opinion, pouring their hearts out in front of others would not accomplish that. Between the two of them and me, there wasn’t a dry eye there. What can I say? I am a sucker for those intimate moments!

From there, we headed to Lakeside Beach for their ceremony. I loved that they incorporated elements into their ceremony to truly tailor it to them and their marriage. Christen’s brother got on the mic and shared a poem along with some heartfelt words. And while Christen and Alan poured sand into a vase to represent their union (how cool!), Christen’s maid of honor got her time on the mic and sang a beautiful song.

After the “I-Do’s”, we all made our way back to Base Camp where there were beers and snacks. It was here where we knocked out a lot of your traditional wedding events. We kicked off those traditions with Christen and Al’s first dance, followed by their parent dances. I loved how Alan and his mom did a non-traditional dance and really got down to the music. Speaking of getting down to the music – once we got everyone on the dance floor a fat headprint of Christen’s cousin got pulled out since she couldn’t make it to their wedding, and everyone was throwing it around and pretending like she was actually there. It was hilarious.

After dancing we cut the cake and got to hear speeches from C & A’s closest humans. Though my time was up, the rest of the night consisted of celebrating their union on the rooftop. Their smokey micro-wedding was an absolute dream, and I am so happy that I was able to be a part of it. 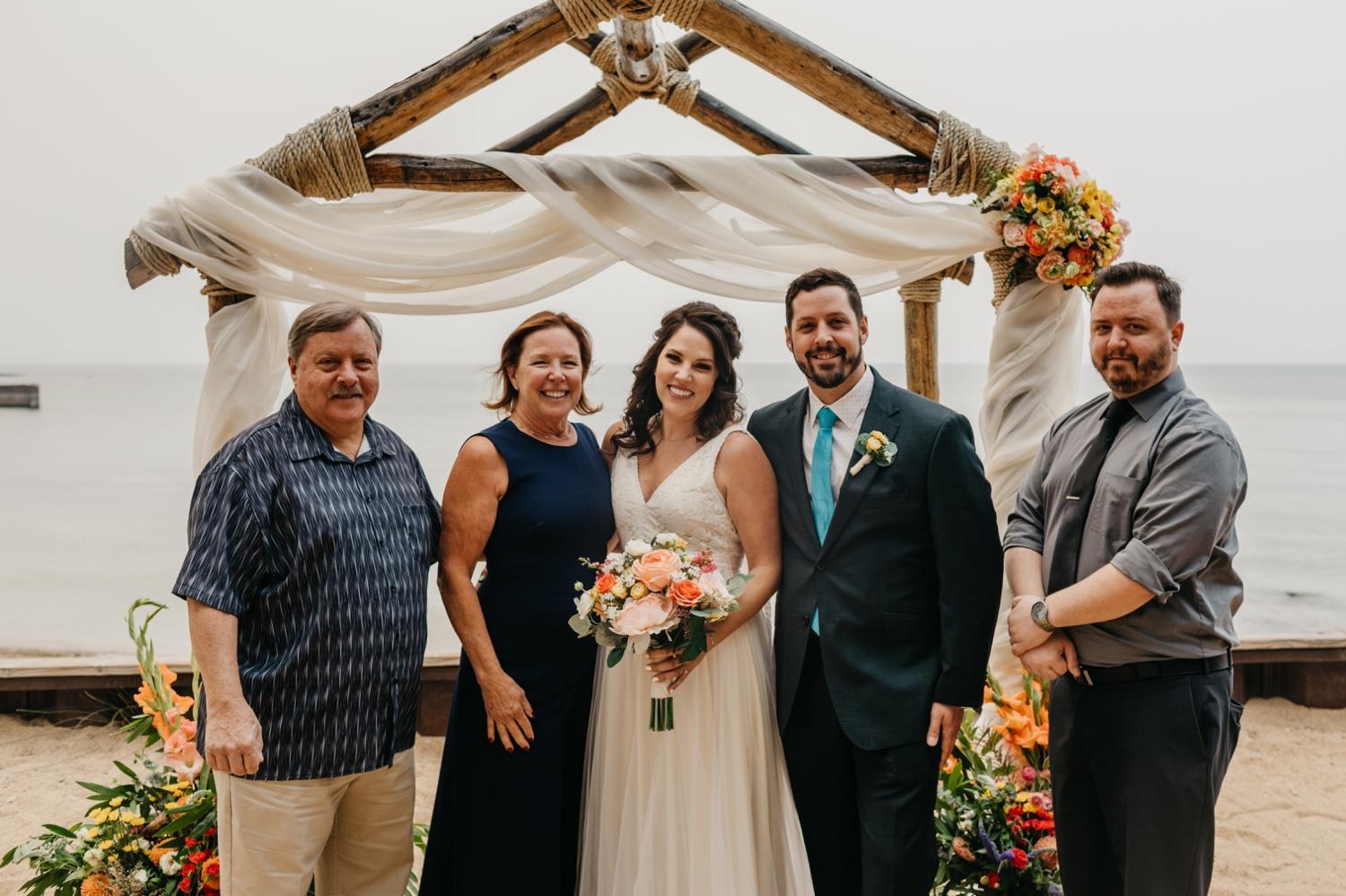