If you are new to Sand Harbor State Park in Lake Tahoe, California, let me describe it for you! You can expect big granite rocks, turquoise water, and golden sands. If you are saying, “STUNNING,” then you are completely right!

This is why I was so excited when Renee and Nick, a Michigan-based couple, told me that their plans were to elope out west in Tahoe!

Even though they had a stormy elopement day, it was so WORTH IT!

Renee and Nick met online while playing a video game. How fun is that?! After some time, Renee moved to Michigan for Nick because he owns a business out there. I gotta say, I haven’t had that story yet, but I think it is incredibly unique and awesome.

Nick popped the question while they were out walking their dog at the park! Their dog is a big part of their lives and Renee even had a sweet custom pin made of her pups. She even added it to her wedding bouquet. Seriously, I love those special touches!!

Their OG plan was to do a courthouse elopement, but they decided they wanted something a little more special. So, they came to Tahoe!

Renee’s family is based in Southern Nevada, but she grew up coming to Lake Tahoe. SO, naturally, Sand Harbor State Park became the perfect spot for their elopement.

I started off their elopement day by going to Boho Bouquets to pick up Renee’s flowers. It was the perfect encapsulation for fall! So beautiful.

I met up with Renee and Nick at the Hyatt in Incline Village where we did their first look. It was so great to just be able to capture that moment together before heading up to the lake. Driving up to the lake I was a lil nervous because of the rain and thunderstorms we were having lately.

As I was coming over the mountain the clouds were hanging so low around Mt. Rose Summit I could not see 20 feet in front of my car. I was so afraid we wouldn’t be able to capture the lake for them.

Let me tell you, THIS WAS A CHILLY DAY.

However, the second we dropped down the elevation, it was PERFECT. There was nothing to worry about, and Lake Tahoe showed up to the partyyyy!

We got some amazing first looks over a great view of the lake as well as jumping into the trees and forest to really capture those Tahoe vibes. By the time we made it inside the car, the rain was coming DOWN. We made it in the nick of time and it was time to head to Sand Harbor State Park to get these two married!

I’ve said it before, rain on your wedding day is good luck!

Tahoe under the storm is my favorite version of her. You’re able to see the clouds over the lake with rays of light that peak through, which is so stunning. It also makes for the BEST lighting for photos.

Renee and Nick had their set up right at the beach. Between the storm and cold, there was no one up here. WHAT A PERK! We didn’t need to ask anyone to leave us alone or anything. It’s so awesome to elope at Sand Harbor and not be bothered. That is part of the good luck that comes with rain!

Once Stephanie, the officiant, and my local fav got there, there was a break in the rain. The waves calmed down so you can hear them gently lapping. They said “I do” in front of all of their closest friends and family.

The cloud cover is my favorite lighting to work in ever. All day I was like “ugh the lighting is so great”! I knew I had to steal them away for some pics in this lighting.

Renee was a super trooper in the warm 45 degrees with a  jacket on jacket off, glasses on glasses off approach for photos. With the lack of people, we had so many great opportunities for epic photos!

Renee and Nick are so in love and so cute together!

What to Know for your Sand Harbor Wedding Day

Did you know when you google “Lake Tahoe” most of the images that pop up are of Sand Harbor? That’s because it’s the most gorgeous and popular part of the lake!

Before you book your Sand Harbor elopement or wedding, you should know that this location does require permits to photograph and host your ceremony there.

But don’t worry, that’s why you have me!

I handle the photography permits part and include that cost in my packages, but you are in charge of securing the wedding permit. It’s a lot less scary than it sounds. I am more than happy to connect you to Sand Harbor’s permit office and make sure that everything is staying above board! 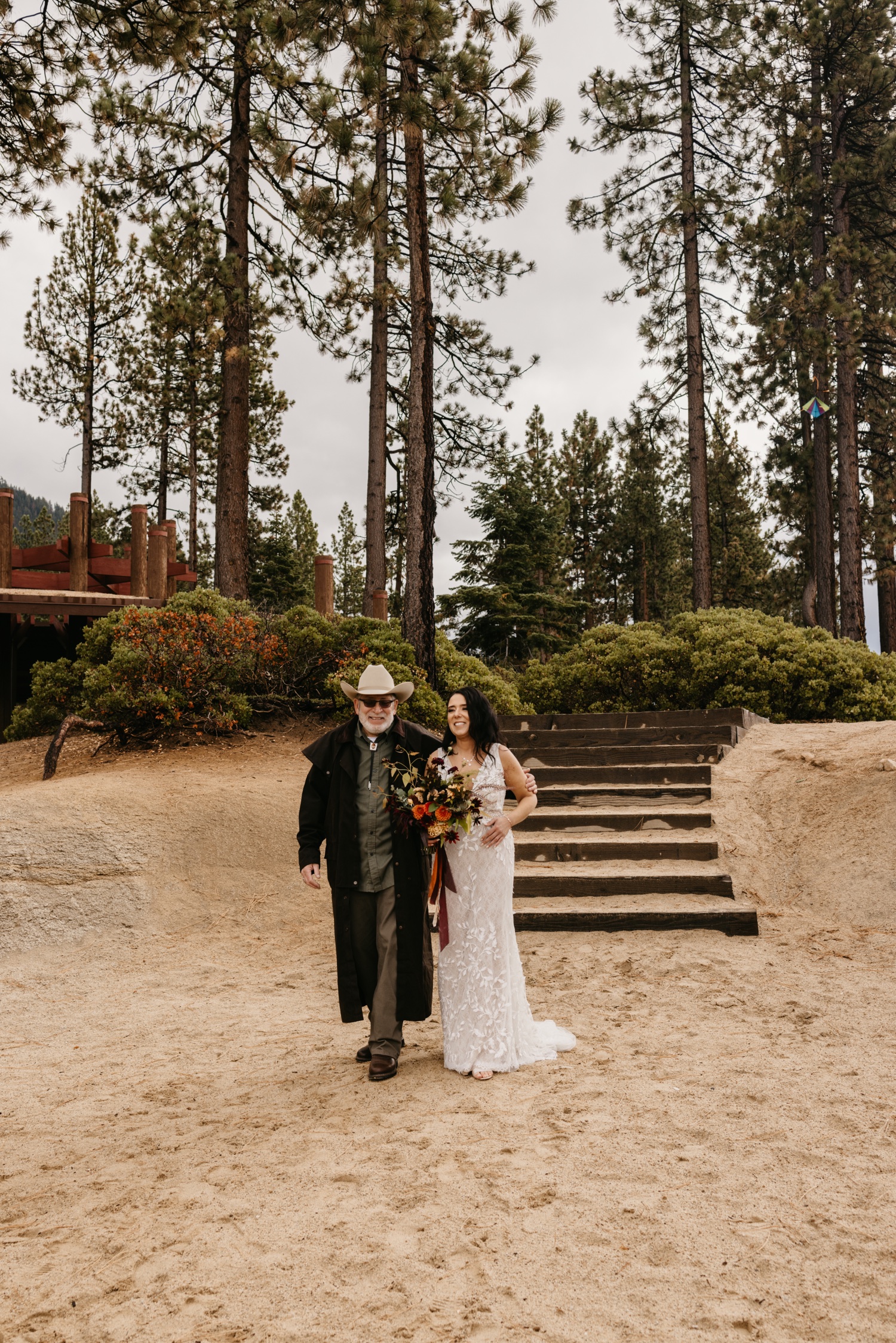